Minsheng Lecture Made in Shanghai: Animation Films of Those Years 6: Classics Roaring Across the Horizon

Minsheng Lecture Made in Shanghai: Animation Films of Those Years 6: Classics Roaring Across the Horizon

The 1986 TV drama version of Journey to the West acquainted almost everyone with a monkey jumped out from stones, which is able to change into 72 kinds of shapes, jump 18,000 Li in an instant, and see into the monsters’ real shape with his eyes. Everyone calls him “Monkey King Sun Wukong.”
However, 25 years before that, Shanghai Animation Film Studio had produced a colored animation film named Uproar in Heaven, which was the very first long animation film in the era where animation films were all short. The 2-episode film was produced after 4 years of polishing, and became the milestone of Chinese animation film history. In this work directed by “The Founding Father of Chinese Animation Film” Wan Laiming, the classical character Sun Wukong roared into the public vision, with a yellow top, tiger-skin skirt, red pants, and black boots, gaining favors from everyone.

As the old Chinese saying goes: “Nothing is saddest than a dead heart, and nothing is happier than a finally fulfilled dream”, the production of this film fulfilled Wan Laiming’s dream, which he has claimed for 20 years. In 1954, Shanghai Animation Film Studio invited Wan Laiming to be the Art Consultant. 5 years later, Te Wei, the head of the studio, consulted him about the production of Uproar in Heaven, a project he had been dreaming for too long, and appointed a team which in today’s eyes is superb.

What makes an animated character everlasting?
And what kind of stories and pictures makes an animation film classics?
Reviewing the production of Uproar in Heaven, the main framers of Shanghai Animation Film Studio can never ignore a vital role in production – Zhang Guangyu, the art designer. 1920s and the early 1930s witnessed the zenith of Zhang Guangyu’s comic creation. He spent 3 months to complete Xi You Man Ji, in which apparently the character Wu Kong is the prototype of the Monkey King in Uproar in Heaven.
“All the character in the film were first designed by Zhang Guangyu, the professor of Central Academy of Fine Arts. When he was creating and living in the Overseas Chinese Hotel in 1961, the vice director and I delivered paints to him there.” According to Yan Dingxian’s memory, the director Wan Laiming was not that satisfied with the first three Monkey King designs, seeing the first as too comic, the second too theatre accessory, and the third too wild, with intense feathers on his head which increase the difficulty of animating. The director asked for a Monkey King that is “Outstanding in the look, simple in the structure, and vivid in color.” As a junior then, Yan Dingxian boldly revised the character feature, which was selected to be the final look in 1960.
At that year, Yan Dingxian was appointed as the leader of Artworks (artworks refers to the drawing the pictures of the scene from the beginning to the end on the paper as a line), the same group with his wife Lin Wenxiao. In films, there are 24 frames within a second; the animation film was demanded to include 12 pictures within a second, which is apparently an enormous load of work. It was not rare for the team to continued working after an 8-hour-work day, in order to ensure that the production is on time. There were over 10,000 manuscripts drawn during the production.
When the artwork team was designing actions, they learned from Peking Opera, and invited a Mr. Zheng, who was then a prestigious “Southern Monkey King”, to give lectures at Shanghai Animation Film Studio, about how to shape a character. The team observed the basic movements the teachers from Peking Opera troupe taught to the actors; they also watched lots of operas, e.g. Eighteen Arhats Fight the Monkey King, Uproar in Heaven, to absorb the features of Chinese culture and arts.
In the process of artwork designing, the director only told the intention to the team, leaving the details for workers to imagine. It took Yan Dingxian and Lin Wenxiao quite a lot of work to make the scene Four Heavenly King Versus Sun Wu Kong to be contented. How to present the intense fight? Yan Dingxian referred to the original novel, only to find that the description of fighting is also limited. Then he went to the temple to observe the four weapons “Feng Tiao Yu Shun” of the four heavenly kings, which led him to the scene of Sun Wu Kong making countless shields to fight against swords, and the little monkeys getting striked down by the sound of pipa.

Yan Dingxian worked for 40 years in Shanghai Animation Film Studio. He had been the director, and the head of the studio, contributing a lot to ameliorating the rules of the studio, and holding the first International Animation Film Festival in 1988, which involved 80 works from 28 countries, constructing communication in the field of animation. He was also the one who was sent to receive the delegation of youth led by Osama Tezuka in 1980s. Speaking of those years, Yan has a lot of fascinated stories to tell.

an Dingxian, graduated from School of Animation of Beijing Film Academy in 1953, and worked at the animation group of Shanghai Film Studio and animation design department at Shanghai Animation Film Studio. He is the council member of China Film Association and Shanghai Film Association, vice president of China Animation Association, member of Association International du Film d'Animation (ASIFA). He was elected to be the council of ASIFA, and appointed to be the judge of film festivals of home and abroad.
He designed the animation for The Proud General, The Picture on the Wall, The Tadpoles Look for Their Mommy, The King of the Jungle, Uproar in Heaven (I and II). He had been director since 1964, and the head of the studio from1984 to 1988. The works he directed include Little Trumpeter (cooperated with Wang Shuchen), Nezha Conquers the Dragon King (with Wang Shuchen and A Da), Sapodilla (cowrote with Li Keruo), The Monkey King VS the Evil (with Te Wei and Lin Wenxiao), Shuke and Beita (with Lin Wenxiao episode 1--6), Deer Woman, Stories in the Forest, etc. Nezha Conquers the Dragon King was rewarded prizes from Minister of Culture in 1979, and the best animation film of 1980 Hundred Flowers Award, special prize of 2nd Manila International Film Festival. The Monkey King VS the Evil received prize of Minister of Culture, the best animation film of 6th Golden Rooster Award, and the first Shanghai Literature and Art Award. In 1988, he held the first 1988 Shanghai International Animation Film Festival. He received special allowance and certificate from General Office of the State Council of the People’s Republic of China in 1993; Yan also authored Animation Techniques and Instructions and Creations of Animation Directing.

Lin Wenxiao graduated from School of Animation of Beijing Film Academy in 1953, and worked as an animation designer at Shanghai Animation Film Studio. She designed the animation for The Proud General, The Carrot Has Returned, Reed Pipe, Uproar in Heaven (I and II), and The Heroic Little Sisters on the Grassland, Nezha Conquers the Dragon King, etc. She had been director since 1978, and directed A Night in the Gallery (with A Da), Snowchild, Breaking the Censer, The Monkey King VS the Evil (with Te Wei and Yan Dingxian), Jiazi Saving the Deer (with Chang Guangxi), Echo, A Coat, Fare Adjustment of the Ticket, Deer Woman (with Yan Dingxian), Shuke and Beita (with Yan Dingxian episode 1—6), etc. Snowchild received prizes from Minister of Culture. The Monkey King VS the Evil received prize of Minister of Culture, the best animation film of 6th Golden Rooster Award, and the first Shanghai Literature and Art Award. Jiazi Saving the Deer received prizes from the State Administration of Radio, Film, and Television, and the 2nd Chinese Children and Teenagers’ Film Tongniu Award. Deer Woman was rewarded the the best animation film of 14th Golden Rooster Award. Aside from being a member of China Animation Association, and a member of Association International du Film d'Animation (ASIFA), she also participated in the writing of Animation Techniques and Instructions and Creations of Animation Directing. After she retired, she was invited to be professor of animation in domestic universities.

The series lecture “Made in Shanghai: Animation Films of Those Years” started from 2016 invited 5 former “backstage master” of Shanghai Animation Film Studio who was engaged in different positions, to talk about those golden years of Chinese animation films. The lectures have attracted lots of audience and received praises.
Made in Shanghai series will continue to take place from October 2017 to 2018 and hold 7 activities, bringing the audience back to the frontstage and the backstage, review the history of Chinese animation film and the memories of several generations, through viewing the background, details, and international communication of the classical Chinese animation films. 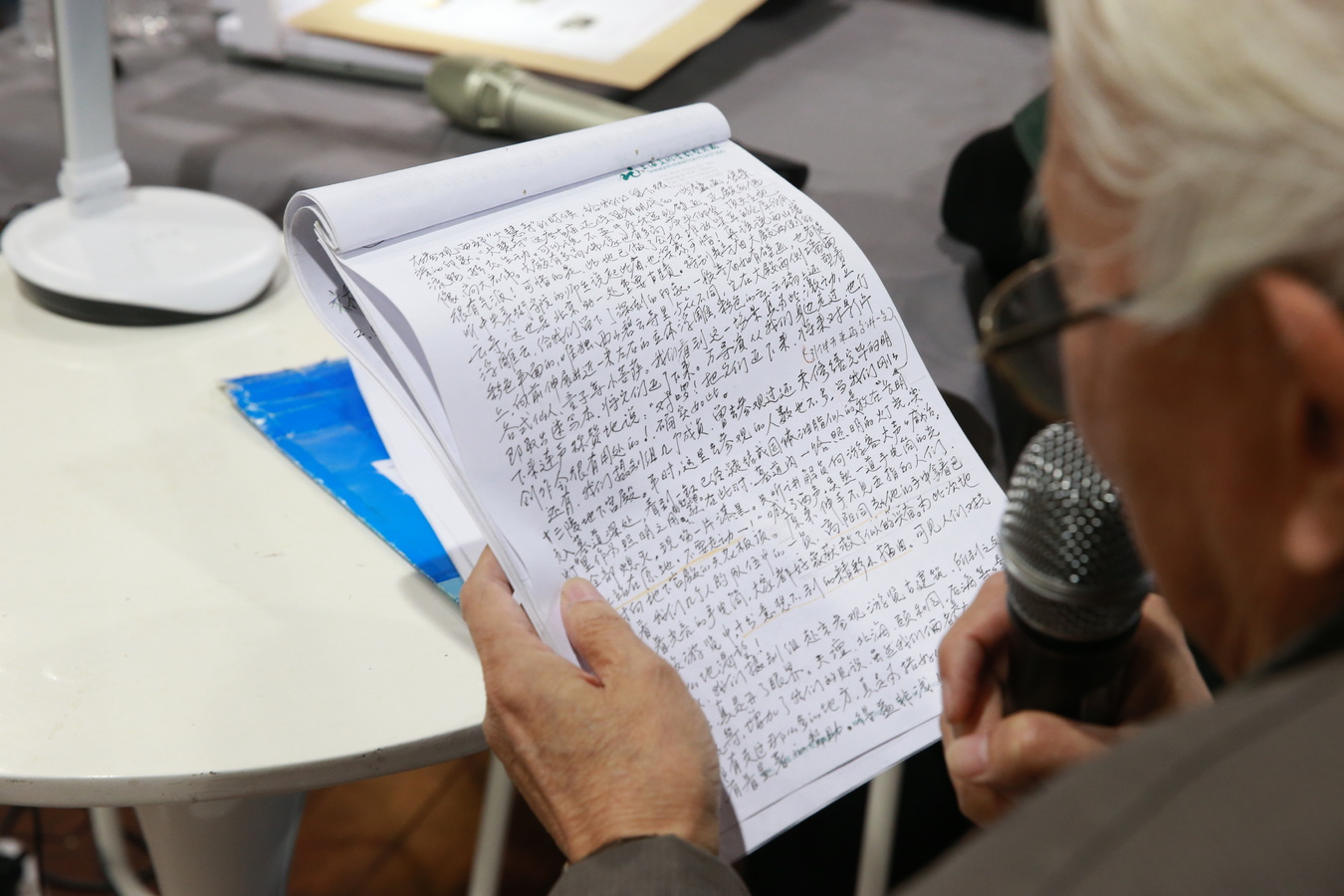 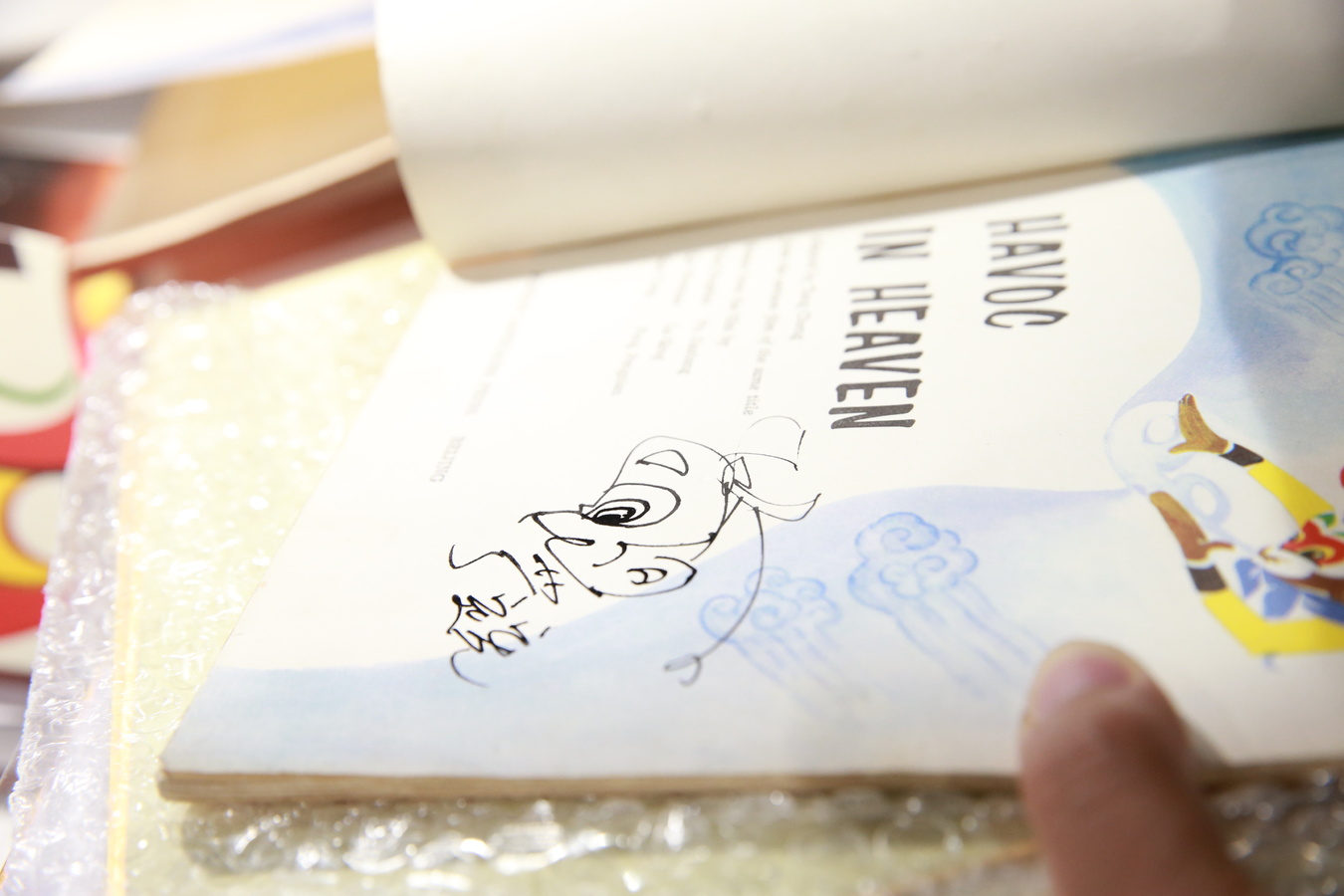 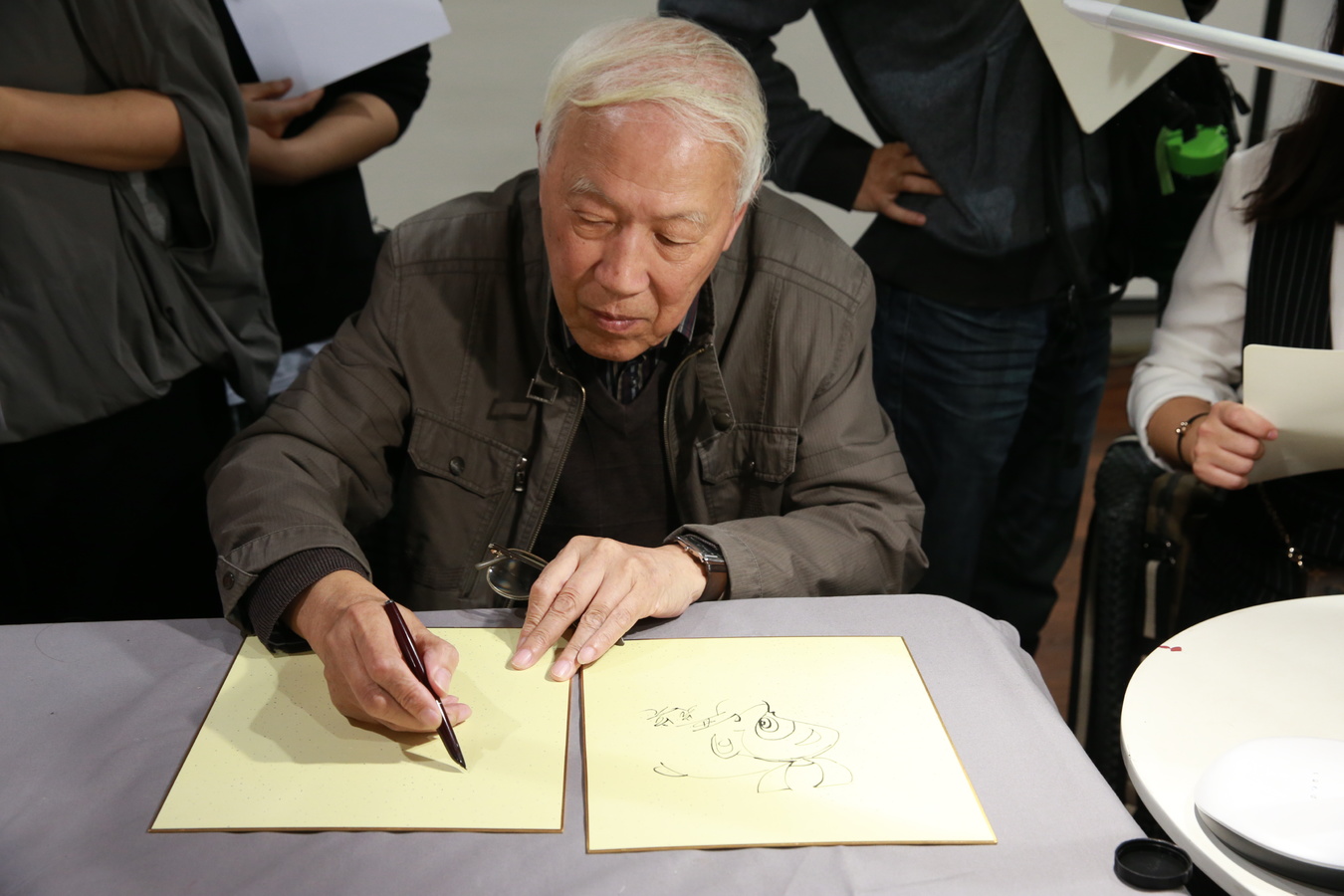 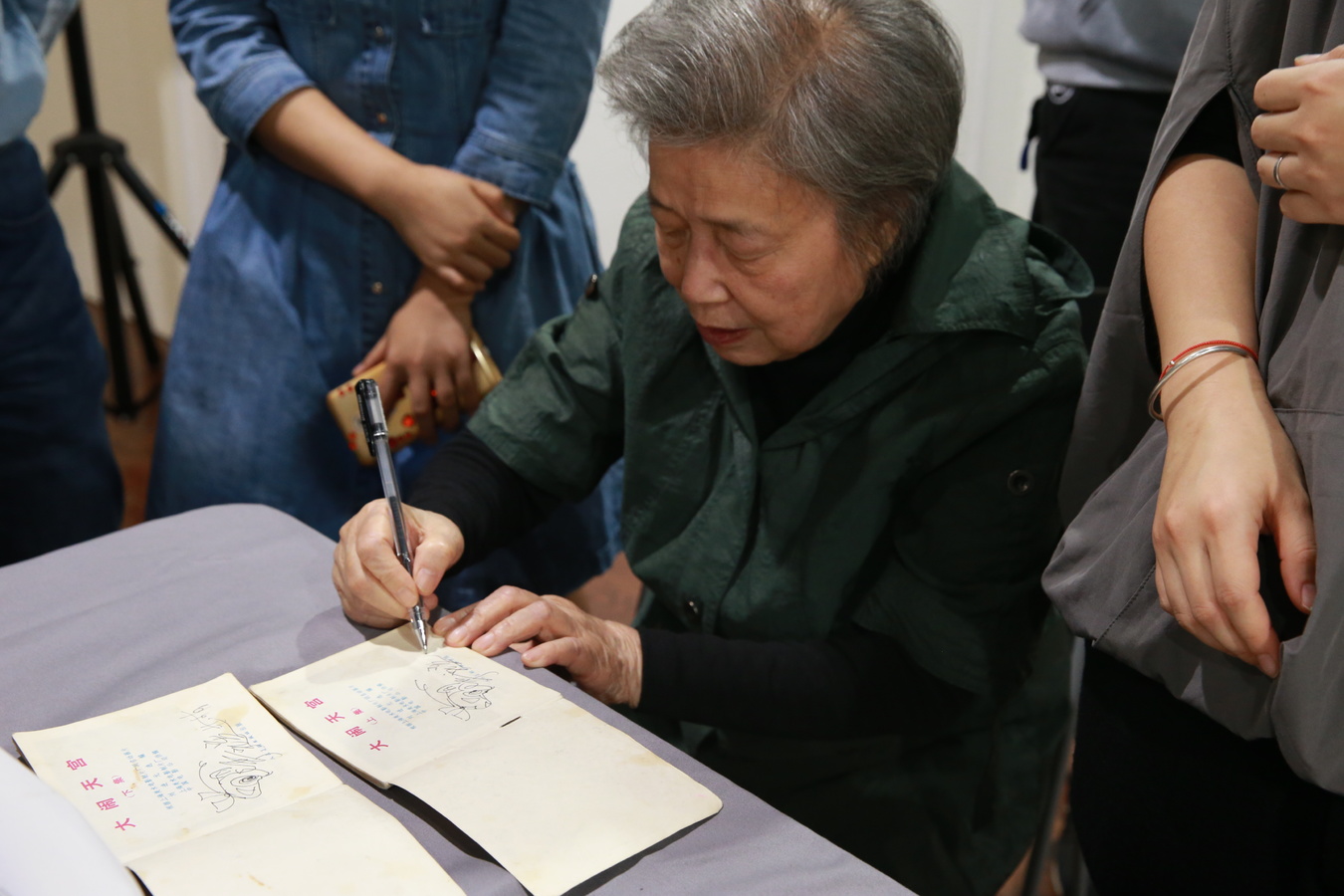