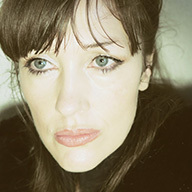 Laura Oldfield Ford is a London based artist and writer  concerned with issues surrounding contested space, urbanism, architecture and memory.

Her multidisciplinary practice investigates new forms of socio-political discourse that have arisen as a result of the radical reordering of urban space in the post-industrial era.

Central to her practice is the dérive , a process of walking in order to map the psychic contours of the city.  She draws on her experiences as political activist and involvement in subcultural scenes, particularly protest movements. More recently the work has shifted into an intense scrutiny of religious zealotry, nationalism and class.

She completed a BA at the Slade in 2001 and an MA in Painting at the RCA in 2007 .In 2013-2014 she was Stanley Picker Fellow at Kingston University. She is author  Savage Messiah ,Verso 2011 and is currently a researcher at the Royal College of Art.